So it was definitely time for the guys and me to make another epic mealtime (can I get a #FTB?). The first time we made awesome chili nachos with a bacon weave and close to a kilogram of cheese...The second time we made red velvet brownies topped with four packages of cookie and cream chocolate and a can of condensed milk...The third time we made a bowel destroying cookie calzone, which was comprised of basically two packages of barely baked cookie dough and a lot of Reese's Pieces, all jammed together. What did we do this time?

Naturally we went with a dessert again (real food ain't cheap!). After some hasty planning, a shopping list made on the fly, and some interesting cooking ideas we came up with the Peanut Butter Cookie Cake.


So what is the abomination to the left, and more importantly, how do you make it? It is pretty simple and, as usual, fail safe.

Read more »
Posted by Unknown 2 comments: Links to this post

I just went fishing for the first time, early this morning (the many occasions before as a bucket-wielding toddler don't exactly count), and it was actually one of the most enjoyable experiences I have had in some time. Just me and my dad, down by the harbor front or whatever it was called by Hamilton, surrounded by lots of geese and ducks in the early hours of the day while we went fishing. It was very fun.

Now of course I had no actual idea of what I was doing. For anyone who watches the show "River Monsters", that is basically where I pretend to learn things about fishing. Granted it was fun whenever my hook caught a snag on the lake floor to scream: "fish on! Fish on!", but really I was pretty clueless. My dad basically did everything for me, although I did get better with my cast and I put some worms on a hook so it wasn't all bad. Alright overall for a beginner I would say, despite a few tangles I got into.

If there was such a thing as beginner's luck however, then I think it showcased itself today. Almost on my first try some mentally challenged perch with a death wish grabbed the bait, taking a nice bite of a hook that was way too large for it. I was surprised that it even went for it, but hey, I caught something! Well, maybe it wasn't luck then, and just some really dumb perch, but details don't matter!


So I was pretty happy, and after a few more hours I caught two more perch of about the same size and maybe a one pound bass (no picture, sadly). My dad caught some perch as well, and they really did seem to have some deranged death wish as the hooks shouldn't have been attracting them so well. But hey, it was fun.


But just you wait! Give it a little time, and I'll be reeling in some "Burlington River Monsters". Who knows, I might even catch something that isn't a baby or the certified moron of the fish world!

Email ThisBlogThis!Share to TwitterShare to FacebookShare to Pinterest
Labels: Sports!

I had a sleep over with a few friends about a week or so ago (never too old), and whenever we have a sleepover the one thing that must happen is some cooking/experimentation in the kitchen. However, not wanting to spend that much money but to still actually be able to enjoy something tasty, we took some time thinking. What was the result after our meticulous planning (about five minutes)? A $12, ten minute recipe: The Cookie Dough Calzone.

This calzone is probably incorporated into the dreams of every kid who has ever eaten cookie dough straight from the tube before. It is the ultimate sweet-tooth dessert, and since you can stuff anything you want inside of the calzone, the possibilities are endless and any additional cravings one may have can easily be sated.

Read more »
Posted by Unknown No comments: Links to this post

Must Read Books - All Men Are Mortal

I've been reading quite a bit lately with summer vacation well under way, and a few days ago when I was in a local bookstore just looking around for something good to buy (in the fantasy section at the time), I realized that is actually a harder task than what it might first appear to be. I mean, you're in a bookstore right? Isn't that the spawning ground of good books or something?

Read more »
Posted by Unknown 5 comments: Links to this post

Something in the Water?

I got back from my Romania "roots" trip a little more than a week ago, and I have at least ten ideas circling in my brain currently as to what I will blog about in the near future. The reason for my delay in actually blogging has generally stemmed from my laziness to go through thousands of pictures from my trip to find suitable ones for posting, as well as an overall intensive schedule I am attempting to set for this summer vacation. But really, at the core, basically I have been slacking on this whole blogging thing. My bad!

So this will just be a short post until I actually get some good pictures on my computer and decide to share some interesting thoughts and things about Romania. Right now, however, what's on my mind is something that my family has been pondering about ever since we got back from Romania: why did we not feel sick after eating so much food (we ate so much it's unbelievable), and why didn't any of us gain weight.

Read more »
Posted by Unknown 3 comments: Links to this post

So I left for Romania a few days ago, and I am currently in the capital city of Bucharest in the very beautiful downtown area. I have also visited the countryside, and over the next two weeks my family and I will also be visiting some interesting castles and some spectacular mountains (Vlad the Impaler!) It has been very interesting so far, and it was nice to meet and catch up with some family and friends. And don't even get me started about the food....Romanian people can definitely cook.

I will be posting some pictures at the very end of this trip, perhaps in a collection or maybe as individual blog posts where I write a little bit about some of the places I have been to and seen. I'm not too sure yet, and right now I'm just more interested in doing things than writing about them. I know this update is somewhat hasty and a little unorganized, but we don't get to sit down much and that is just how these trips should be!

Anyway, here is a cool picture I saw on the sidewalk today in the older part of town. It reminded me of the Banksy stuff, even though there isn't anything political about it. 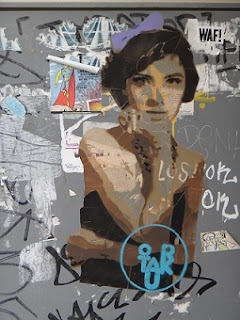 Email ThisBlogThis!Share to TwitterShare to FacebookShare to Pinterest
Labels: About, Art, Travel

Farm Fresh vs. Industrial Food - A Battle of Immense Confusion

Unless you have been residing under a rock for, say, the last fifty years or so, then the ongoing and worsening obesity rate is probably a crisis that is not very new to you. How unhealthy we have become  in our diets and "live-to-eat" lifestyle,  especially as a Western society (that's not to say we are the only culprits), is a harsh reality constantly brought to the attention of the guilty masses. Television, newspapers, studies, policies...All these outlets bombard us with mixed images on a day to day basis, junk food companies taking one side, while "whole food" foodies attempt to level the playing field with their arguments and ideas. In short, we know the problem we face, we know why the problem exists, we just don't know how to even begin to solve it.


I thought I had a pretty solid understanding of the issue. We eat too much, and too much of the "bad stuff." I never really thought about it much more than that, and the fact that there are such different ideas and sides to the entire argument was surprising to me. I thought everyone who had an opinion was more or less under the farm fresh banner, and it was strange for me to find out there were other sides to the issue. The article that caught my attention? It was basically a counter to everything the farm fresh and wholesome, real food argument had to stand upon, and the opposite of everything that I thought to be the general consensus. And what is the title of said article? How Junk Food Can End Obesity. Seriously, you can read the article if you doubt me (please do). ---> Atlantic Article


Be warned however, as both parties are riddled with faults and stubborn ideas, and this article provides a perfect example of just how divided, irrational, and indecisive the food world is on handling this obesity crisis. Again, read the article, and try not to get too annoyed.


Read more »
Posted by Unknown No comments: Links to this post